Socket sets are a great addition to any tool kit. They can be used for a variety of DIY tasks around the home, as well as in the car.

One point to make clear though is that unfortunately there are a lot of dubious sellers and brands online that want to make it look as though they’re the best.

I’ve spent the last six months testing out several brands. Below, you’ll find my top three picks based on their quality, set size and also the pricing. In terms of my testing, I used each set to put together a chair which had bolts on it, as well as some flat pack furniture that also had bolts on it. Not only did I use the set to build it, but then used the same set to dismantle it before moving onto the next socket set.

I also used each socket set to remove bolts from an old car part to see how well it would fare in that regard in addition to using the different screw bits in order to remove a variety of screws. 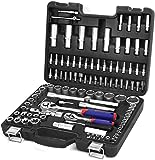 I’ll get the most expensive socket set out of the way first. I’ll also start by saying that I LOVE this socket set.

To be fair, it is expensive, but for someone that is doing to be doing a lot of work using sockets, be it in the house, car, or both, this is a fantastic set.

I’ll admit that it has the lowest number of pieces compared to the others on this page. However, the quality of Wera tools makes up for the price point.

First off, we have the ratchet itself, it’s of the 3/8” variety and damn is it impressive. What sets is apart from other brands is the fact that the head of it can pivot to a variety of different angles. This isn’t something that you get with other ratchets. Instead, you need to use an attachment bar instead to be able to use the ratchet in an awkward angle.

What I really like about the Wera is that the ratchet handle can also turn into a screwdriver. Thankfully, there are also screwbits included in the kit as well.

Overall, there are less parts in this set compared to the other sets in this list. However, the quality of it is so great that the quality really makes up for it. During my testing, it flew through the tasks with ease. I have friends that are hardware engineers for laboratory equipment, and they use this exact set to repair the equipment. These are companies that are worth billions of dollars, so it says a lot that this is the tools they use to repair the hardware.

I’ve also had some issues with carpal tunnel syndrome and found the handle on the ratchet the easiest to use out of all three on this list.

I’ve been a fan of WorkPro tools for a long time, and this 108 piece kit is no exception.

The first thing that jumped out at me was the quality of both ratchet handles, especially at this price point. I’ve had issues in the past with some brands whereby the handles themselves felt pretty flimsy and uninspiring. This isn’t the case with the WorkPro set. The handles feel great, as does the handle on the includer screwdriver as well.

In terms of the overall quality, all metal components are made from chrome vanadium steel. As part of my testing, I always like to drop the tools to see how well they fare in real life situations. There was no detriment to their function after being dropped several times.

In the 108 piece kit, there are the two aforementioned ratchet handles. Both have a 72 teeth ratchet, as well as being able to be used to tighten down and also loosen bolts. The switch used to change the direction of the ratchet is also smooth and very robust. The ratchet sizes are ½” and also ¼”. It also comes with an attachment so you can alter the position of the socket.

In terms of sockets, there are 26 ¼” sockets, 32 ½” sockets and also several extensive bars.

As mentioned, there is also a screwdriver included, and this is accompanied by 18 screwbits and 18 bit holders.

This also comes included in a sturdy carry case to keep everything in place. I really like this kit and it’s a great addition to anyone that is looking to do a moderate amount of DIY and doesn’t mind spending a bit extra.

My last pick is one that is made by Amazon (or at least for them) and is also the cheapest option on this list.

In my time testing it, I’ve found this to be a very competent socket set for the price point.

All in, there are 123 pieces to it. Much like the WorkPro, this includes two ratchets. However, the sizes are 1/4” and 3/8”. In addition to this, the sockets, ratchets and extension bars are also made out of incredibly strong chrome vanadium steel. Much like the others on this list, I dropped the ratchets several times and there was no detriment to their function. They still performed as well as they did when they first came out of the box.

Since it’s a slightly cheaper set, I was also curious how the switch on the ratchet would fair after being moved back and forth several times. I’ve moved the switch on both over 100 times and it’s still holding on well. Likewise, the sockets clamp onto the ratchets well and they are great at carrying out their job. There were some instances whereby I couldn’t use a socket to get a bolt out, but that was due to it being over tightened way more than it should have been, so it really can’t be blamed on this set.

What I also really like about this set is the fact that in addition to the large number of sockets in the kit, there are is also a screwdriver handle and an extensive number of bits. The handle is well made on the screwdriver, and I never had any real issues of the bits slipping when trying to get out tough screws. Lastly, there is also a selection of allen/hex keys. This is a nice addition that has certainly came in handy around the house.

It also comes in a sturdy carrying case to keep everything in place. For those that are on a strict budget but still needs a socket set for some light work in the house, then I would highly recommend this.