Miracle-Gro Patch Magic is, as the name would suggest, used for patching up areas of your lawn that have become baldy over time.

The reasons for this are numerous, and include it not being water enough, or even just down to animals damage the area.

How To Use Miracle-Gro Patch Magic

Thankfully, it’s actually really easy to use. The 1kg container comes with a handy spout in the lid. It is recommended that before you use it that you give the container a thorough shake. When I applied it, a few vigorous shakes of the bottle was enough to do this. The reason for this is that inside it, there is the seed, but there is also a feeding component and also coir as well.

After that, it’s simply the case of apply it to the desired area that you want to patch up. It really is that simple. A bit of advice though is that the whole it comes out of is a bit bigger than I’d like, so ideally you wouldn’t do it in windy conditions because if more comes out than you wanted, it can blow away.

When I applied it to my lawn, a slow, steady pour was all that was required. After that, it will need to have water applied to it. When I used it, it was just enough so that the coir turned a dark chocolate brown.

I do have two points on the water, though. First off, do not use a garden hose for this if you’ve got a gun with only one setting on it. If the water is too much, it’ll wash the seeds away. Instead, use a watering can or a jug to saturate the area with water slowly. The second piece of advice is that if you’re expecting heavy rain soon, don’t apply it since it can result in the seeds getting washed away as well, wasting the product.

Also, unlike some seeds, it isn’t recommended that this is used between October to February. This is simply due to the seeds not being able to germinate properly thanks to the cold weather. Whilst you can try and use it, (I did) during the winter months, you won’t see any benefit of it at all. To be fair, this is included on the container, but I felt it was important to point this out in the review.

I was actually really impressed on how well this product worked. I had a mishap with a strimmer in that it got away from me and took a massive chunk out of the lawn. I was actually pretty worried since this was right down into the soil. However, after three applications, you wouldn’t know that the area had been damaged at all. These applications were spread out over the space of 6 weeks with the section being watered twice weekly to keep the coir strong, as well as the seeds.

Of course, the speed at which you’ll see results with this is dependent on a lot of factors including the heat, the wind and how much water the seeded area is seeing. After a week, it was clear that the seeds were germinating properly and that the grass was growing rather well.

I would say that I used maybe 150g of product in order to fix the area I damaged. As a comparison, I had the gardeners that were working on the site how much it would be to fill that area in with a fresh bit of turf and let it knit together and they quoted in the region of £35.

It’s not a massive sum of money, but considering I used a tenth of the product at a third of the price as a new piece of turf, it’s definitely something to consider. I’ve also used it to fill in the patches in some of the other bits of the lawn that haven’t quite knitted together properly and it’s worked exceptionally well.

I would say that it is thanks to the addition of the coir in the mix, which acts as an alternative to using topsoil that really helps to keep the seeds in place, but also gives them enough nutrients to go.

Whilst the price of it can fluctuate, as is the case with anything, you can normally get it for less the £10. When you add in the fact that there is also a feed in it as well to help the new grass grow and make it strong, it really is a no brainer. I have seen some people complain online that they tried to use this to seed an entire garden and it was really expensive. But this product isn’t designed for this, as the name suggests, it’s just to patch problem areas up.

It’s a great emergency seed to have in your collection. To further enhance the results, I would recommend that you follow up with a high quality lawn feed, such as the ones found here. 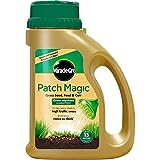 The spout could be a bit narrower for easier pouring.